With the students selected, the scholarship staff in Nakuru got busy. First order of business: taking the three girls to town for ice cream. While ice cream is not required for secondary school admission (and thus not funded by your donations), it was a lovely chance to get to know the three young women. At the ice cream parlour, they were unsure of how and what to order. Viliy (Villitracia) ordered “the same as Katie” and got lemon sorbet. Peris thought to get two scoops, one of mango sorbet and one of mocha cream, but on sampling the two flavours together, she decided to get just the mango sorbet, with Triza getting the same. With the ice cream served, the four young women (our scholarship recipients and scholarship staff Katie) started to get to know each other, away from parents and teachers.

After the ice cream treat, Katie showed the girls the sights of central Nakuru. Despite being born and raised in Nakuru, none of the girls were as familiar with the downtown area as Katie, who had been here four months. As members of a lower economic class, their families lack the money and reason to travel to the center of town. They visited the nicest hotel in town and marveled at the lovely blue swimming pool and the fat white tourists sunning beside it. They rode an elevator – her first time, Viliy said – to the top of the Highway Towers building, and admired the view of the city. Everyone had a fun day and by the end, had become more relaxed around each other. 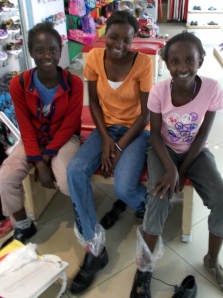 Trying on new shoes for the first time. More pictures

The second outing, a week later, was a back-to-school shopping trip. Tom went with the three girls this time, accompanied by Millie, a teacher at St. Paul’s who provides invaluable linguistic and cultural translation. They began this trip at Bata Shoes. To you, this might be just an unremarkable errand, but for these girls it was their first time to buy new shoes. For Tom, it was moving to watch the three young women experiencing new shoe shopping for the first time. At first they were hesitant, but they gained confidence and left happily, each with a new pair of black leather school shoes and white canvas sports shoes. While in school, did they think that their hard work and success would bring such material rewards as a new pair of shoes, paid for by generous strangers from around the world? Certainly not.

The rest of the school shopping trip was similarly familiar for western readers and new for the three scholarship awardees. They went to the school bookshop to buy their first new schoolbooks, to the uniform shop to buy their first new school uniforms, and to the supermarket to buy the required boarding materials. In all, for the three girls, the day drove home the importance of the scholarship that they had won and of the unexpected material rewards that can come from hard work in school.