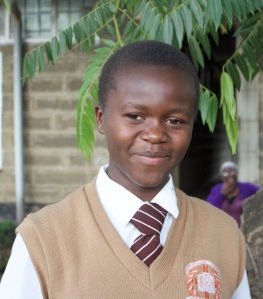 Margaret finished her first year at Christ the King Girls Boarding School in November 2016. She is now 16 years old and greatly enjoying her new school. Margaret is currently enrolled in twelve classes and is particularly excelling in Biology, History, Agriculture, and Religious Studies. She is ranked 14th out of 78 students. Margaret grew up in the Bondeni slum area of Nakuru. More details will be available as we get more letters from her.

Vincent in his first year

Vincent finished his first year at Loreto Nakuru School for Boys in November 2016. He has won the hearts of his teachers and classmates, as he is one of the top academically-achieving students in whole school. In the last year, he also won a regional award for a poetry recitation, participates in school government, and is a star on the school soccer team. His shy, humble demeanor only adds to his likability.  Vincent is enrolled in eleven classes and scores high marks in English, History, Chemistry, and Swahili class. He is ranked 5th out of 61 students in his class. More details will be available as we get more letters from him.

Joyce is the oldest of five children.  Joyce started her freshman year at Christ the King Girls Boarding School in February 2017.  At school, she enjoys playing netball and her favorite subject is Christian Religious Studies.